I have a total of 800 dvd's fuck streaming and cable intertainment !!!! 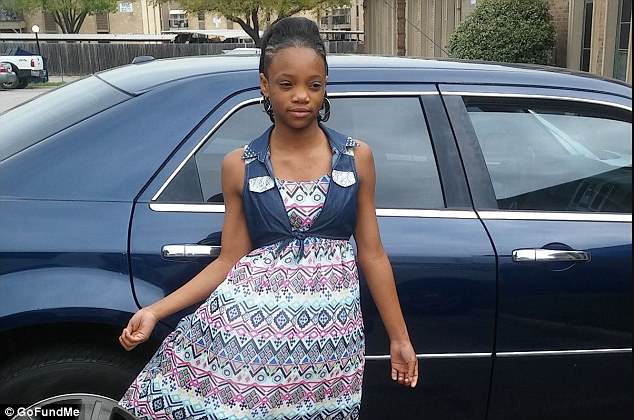 A 14-year-old Texas girl has been sentenced to 25 years in prison for stabbing her friend to death during an argument over a sleepover.

The teen from Fort Worth, who is not named due to her age, stabbed Nylah Lightfoot, 14, in the chest and neck when she went to pick up her clothes from her friend’s home on May 29, 2018.

The victim’s mother Anntoinette Carter claimed that the mother of the then-13-year-old suspect stood by and watched the altercation between the two girls unfold, without stepping in.

The defendant was found guilty of murder but not guilty on aggravated assault charges in Tarrant County court on Thursday, and faced a minimum sentence of probation and maximum of 40 years in prison.

A 14-year-old girl has been sentenced to 25 years in prison for stabbing her friend to death during an argument over a sleepover on May 29, 2018, in Fort Worth, Texas. Victim Nylah Lightfoot, 14, is pictured

A 14-year-old girl has been sentenced to 25 years in prison for stabbing her friend to death during an argument over a sleepover on May 29, 2018, in Fort Worth, Texas. Victim Nylah Lightfoot, 14, is pictured

The girl will be held in a Texas Juvenile Justice Department facility, according to presiding Judge Alex Kim.

The court will determine whether to transfer her to an adult prison or grant her leniency on or before her 19th birthday.

Carter delivered a victim’s impact statement after the sentence was announced, telling her daughter’s killer: ‘When they told me it was you, it hurt. You was at my house every day.’

The heartbroken mother said that her daughter wanted to become a makeup artist, and that would sneak into her bedroom to get makeup for herself and the friend.

Now, Carter said, she will never get to see that passion again, nor will she see her daughter go to prom, graduate high school or get married.

‘You spent her last birthday with us. I don’t know how I come back from this,’ she said through tears.

Carter had previously described her daughter and the suspect as ‘on-and-off’ friends.

On the day she was killed, Nylah asked if the girl could sleepover, to which Carter said no, according to The Star-Telegram.

Then the suspect asked Nylah to come over and retrieve clothes she had swapped with the teen.

When she arrived at the girl’s Fort Worth apartment complex, the pair got into an altercation that turned deadly.

The little girl was taken to John Peter Smith Hospital for her neck and chest wounds where she was pronounced dead, according to the Tarrant County medical examiner’s office.

‘Now I’m daughterless. And my heart feels like it’s just been ripped out and stomped on,’ Carter said at the time.

The Nylah’s murder trial only lasted two days. When the suspect took the stand, she said killing her best friend it was something that she would forever regret.

‘She was like a sister to me,’ she testified.

Prosecutor Jim Hudson said during his closing statement: ‘The case was graphic, disturbing and unsettling. Because of the decisions she made, a family now lives without a daughter.

‘We ask that you send a message to her that these acts have consequences.’

He continued: ‘There is no arguing what her intent was. When she came outside with the knife she was still in control. But not even her friend could stop her. She was only following through with what she had threatened twice.’