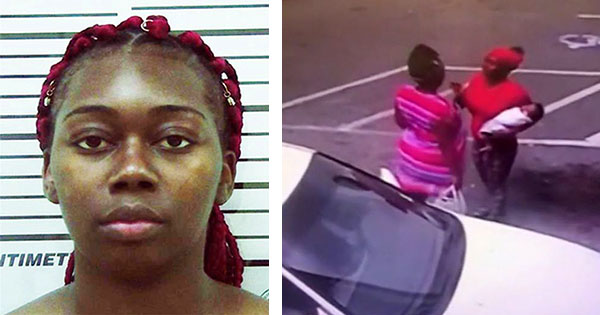 Moultrie, GA — Karen Harrison, a 26-year old mother from Georgia who accidentally dropped her 3-month old son during a fight, has been officially charged with murder. The baby, who was brought to a local hospital for head injuries, has since died.Apparently, Harrison had words with another woman identified as Terra Brown that quickly escalated into a physical fight.

Originally Harrison and her friend, Carneata Clark, told police that the baby was injured after he fell from her friend’s arms while she was holding him. But video footage clearly shows the two arguing and then fighting as Harrison cradles her baby in one arm.

When the two women begin to actually fight, the baby is seen falling to the ground and another woman rushes over to pick the child up.

33 year old shop keeper Trudy was held-up robbed and killed. The police is currently investigating the matter and are asking persons with info to come forward. 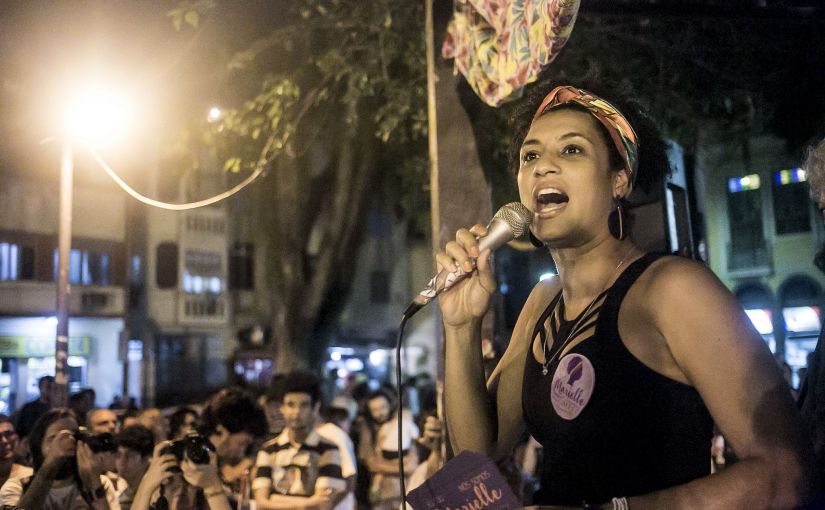 Maine: things are getting real bad in south America when you have two cops,possibly!!!! Target politicians for assassination.Well, that is what happened in South America in Rio De Janeiro. This woman was an activist for Afro south American’s rights and a fighter for the LGBT community and two cops allegedly killed her,let’s find out why!!!!

The police have arrested two former police officers tuesday in the murder of a Rio de Janeiro councilwoman Marielle Franco and her driver,The murder shock south America and lead to many protest. It also shocked many countrries.Even though many has been questioned about the murder of Franco a prominent activist for Afro-Brazilian and LGBT rights.

“Its was a crime against a lawmaker, a woman, exercising her democratic function who had her life taken away in an unacceptable , criminal way,” Rio de Janeiro state Gov. Wilson Witzel told reporters

Maine : Its seems that the more i look at south America and the people down there i never seen so much corruption like what iam seeing since my time covering Africa. Assassinations,starvations, you name it the works!!! I did a story about Venezuela and the people eating out of the trash trying to fine food. How that country turn to socialism and now they got the civilian starving to death.

While Witzel praised police and investigators for the arrest,the case send a massive message that there is deep corruption in Brazil’s police force,including connections to the Military and paramilitary groups that controls a large part of the state

The suspects were id as Ronnie Lessa, 48, a retired military police officer, and Elcio Viera de Queiro,46, who was fired from his job in 2015 . The law reject both parties involvement of the shooting

Lessa was arrested near the same rio condominium complex where president Jairo Bolsonaro has his hom, Police said

Maine:Its seems that Brazil is having problems and south America it self is braking down with corruption i will keep track of this story as it continues but as an African American we should pay more attention to our brothers and sisters in Brazil and south America we hav alot of them down there . i hope the arrest the people that killed this woman because in a civilization we only can be civil

In Addition: The people that murdered this woman and activist stood out side a meeting she attended and waited for two hours and killed her on the spot. it is a sad day in Brazil where you freedom cannot be freely be displayed and fighting for people that don’t have a voice can get you murdered!!!! if stuff like this prossit in countries like Brazil how can you have order?

Baltimore, MD — The family of Korryn Gaines, who was shot and killed by a police officer three years ago, is disappointed after a Baltimore County judge has overturned the decision of a jury that awarded them over $38 million in damages for her wrongful death.In 2016, local police officers went to Gaines’ apartment to serve an arrest warrant for failing to appear in court for two different charges. Gaines, who was found inside the apartment with her boyfriend and her two children, allegedly pointed a gun at the officers.

After a 6-hour standoff, police officers fired shots when she allegedly threatened to kill them, although their neighbors told different stories. Gaines was fatally shot and her now-6-year-old son, Kodi, was injured.

Her family filed a lawsuit against Baltimore County Police and Cpl. Royce Ruby, the officer who fatally shot her, claiming that they used excessive force. The jury sided with the family and last year, they were awarded $38 million in damages, which included $33 million to her son, Kodi, $4.5 million to her daughter, Karsyn, and $9,000 to her parents and estate.

However, Judge Mickey J. Norman recently dismissed the claims and denied the family of the award. Norman stated in his ruling that Ruby’s actions were “objectively reasonable” and did not violate her rights against unlawful seizure. He noted the “qualified immunity” that protect law enforcement and government officials from civil liability when doing their job.

Gaines’ family said that they are planning to appeal the judge’s ruling.

“It’s devastating to a certain extent, but they’re a very faithful family,” J. Wyndal Gordon, the family’s attorney, told The Baltimore Sun. “It’s not over.”

Harvey Hill was one of three inmates who died at the jail in 2018 under suspicious circumstances.

AMississippi jail finds itself, again, in the spotlight over the death of a Black inmate under suspicious circumstances.

Attorneys representing the family of Harvey Hill, who died nine months ago at the Madison County jail, announced on Tuesday that they filed a wrongful death lawsuit against the sheriff and other officials, the Clarion-Ledger reported.

Hill was arrested for trespassing on May 6 and died in custody one day later.

Part of the family’s frustration is that after nine months they still have no official answers about the exact cause of Hill’s death. They don’t believe that Hill, 36, died from possible cardiac arrest, as they were told. The family believes he died after jail guards “brutally” beat him.

“That is totally unacceptable,” attorney Carlos Moore said, noting that the family still has not received an official autopsy report. “Had the results been in the county’s favor, they would have released them by now.”

Hill’s death was one of three such deaths at the jail in 2018, in which families suspect foul play. Larry Thompson, 51, died three days after his release from the jail in November. And in December, Lanekia Michelle Brown, 37, was four weeks pregnant when she was reportedly found dead in her jail cell.

The lawsuit accuses the jail guards of beating and pepper-spraying Hill while he was handcuffed because he failed to show proper respect to one of the guards. They allegedly returned Hill without medical care to his cell, where he was found dead.

In Brown’s case, she was reportedly discovered dead in her cell when a nurse went to check on her after she had complained about having stomach pains, according to the official account. Brown’s mother said she was not allowed to see her daughter’s remains in the days after her death. She demanded answers but received no explanation about how she died.

Moore, who is also representing Brown’s family, said at a news conference in January that he was looking into whether Brown was given proper medical care. He suspected that jail officials discriminated against her.

Thompson’s family said he was healthy when he walked into the jail but was nearly unconscious and unable to walk when he was released. While incarcerated, Thompson called home and said he had been beaten, his son recalled. The family said witnesses at the prison also told them that jail officials had assaulted Thompson. They too are demanding answers. 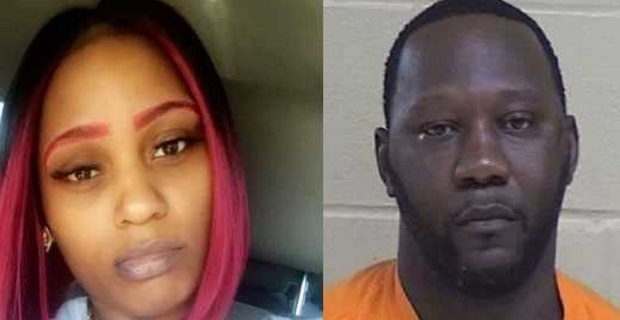 This had to be the most devastating facebook live killing i’ve ever seen on your tube. Newnew a mother was shot in the head a year ago and it was caught on facebook live . After Newnew said sorry for her comments to Roberson present girl friend for her comments on facebook. Roberson stood over the woman and shot here in the head while screaming (you want to be famous i will make you famous) then Roberson predeceased to point his gun to the head of Newnew and shot her ones and injured her kid. Roberson continued out side where he shot a cop before giving up.

Now this story was crazy i did not know if she knew that she was going to die but last time i seen this story and seen the video i do not think she thought this crazy man was going to kill her. There was another person in the room and that person was Newnew’s son who was injured when the incident happened. I was in shock and i remember saying to myself what kind of world we are living in today where and man can pull a shot gun and kill a woman like that on a live feed like facebook.

You have to ask yourselves from a few years back we just herd about news like this a day or maybe today’s after the crime now we can see these crimes and murders in real time now!!!!!

Roberson was sentence to a 100 years in prison. reports say that Roberson was suppose to get the death penalty but the mother stepped in and pleaded for this man’s life and all he got was 100 to life after a execution style murder of her own daughter.

Personal if that was my daughter it would have been off with his head!!!! But the mother pleaded for this man’s life and he will have to sit in jail for the rest of his life because of this killing of an unarmed woman!!!! In court he is already sorry for his actions and pleaded with the family. I guess he had along time to think about what he did the last year.

Humanity has dropped to a all time low with this case!!!! what kind of man brings a shot gun that large or any gun for that matter to deal with a woman that wronged him, Where are we going where you can catch live feed of a murder just by browsing face book or youtube. It is said a kid lost his mother over senseless voilence over words!!!!!!